So last year when I was initially getting into finding things on Kickstarter I came across a project entitled The Night Parade of One Hundred Demons, a project for an artist living in Japan to product a book about yokai. Yokai are otherworldly creatures of Japanese folklore and not many books have been translated into English about them leading to them not being hugely well known outside of Japan. People have come across some examples such as the kappa, oni and kitsune, but a large number are unknown to westerners.

The idea behind the book was to paint the images of 100 of these yokai and pair them up with descriptive text regarding the folklore around them in English. A project that was well executed and I am the proud owner of a copy of the book (it has subsequently been made available for general purchase on Amazon.

The book is generally presented as a two page spread, one page covering the text of the yokai, and the other a full page painting done by the books author. All the paintings are in the same style, and it is a style that suits the sometimes whimsical nature of the subject matter. 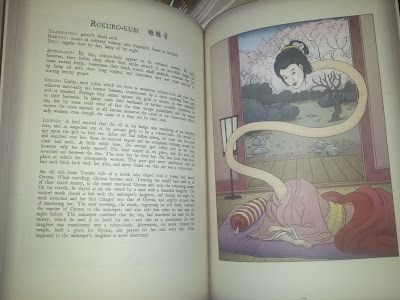 What does this have to do with a role-playing blog? Well one of the reasons I got it, apart from an interest in Japanese history and folklore, was to use it to breathe colour in my Legend of the Five Rings games. While not all of the creatures in the book of of use to a game such as L5R (some are just silly, as is normal for much of folklore,) some will definitely find their way to my gaming table.

There are several that disguise themselves as women, some are good natured and some just want to eat young men (great for populating a mysterious geisha house in the middle of nowhere.) There are various ghosts and spirits, many demons and servants of hell, and a lot of just playful supernatural wildlife.

Some of my favourite include;


It's a great book, obviously put together from a love of the subject by the author. Great for those who are interested in the subject matter, though it isn't cheap. If you want it as inspiration for a supernatural Japanese game such as an L5R game or the like, then it definitely has its uses but may be stretching the worth slightly if you don't have a broader interest as I don't believe everything would be usable.

If you'd like to see more images, or find out more about the book or author, then you can visit their website at http://www.matthewmeyer.net/
Posted by Ben W Bell at 7:52 AM

Email ThisBlogThis!Share to TwitterShare to FacebookShare to Pinterest
Labels: Legend of the Five Rings, Reviews